This video has been created by Glenn Conroy as tribute to all attendees of SHOBODA 18. It was a most remarkable event and will live on in our hearts and minds forever. The song “AMAZING” came about as a result of a workshop in which we explored our Bardic being through story, poetry and song.

Random thoughts, words and phrases were written on slips of paper and tossed into the magic hat. What emerged, line for line, and with minimal editing is what you hear.

Whilst Glenn added the melody and recorded the song, all credit must go to the workshop participants – from both sides of the ditch – for their diverse thoughts and willingness to share what was in their hearts. You know who you are and which words are yours. Blessings to: Les, Cate, Linda F, Katherine, Michael-Scott, Chris, Michele, Liz, Narine, Mark, Belinda and Linda C

The Order of Bards, Ovates & Druids

Setting up for SHOBODA 19 - The OBOD Southern Hemisphere Assembly at Tatum Park. 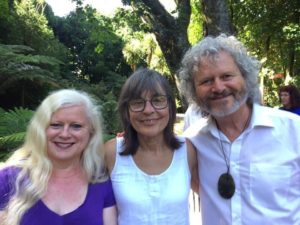 All year we have been working as a team to set up for the Druid Assembly. With bags packed and boxes labelled for the various events, we set off in convoy to Tatum Park on Thursday ready to receive the visitors from New Zealand, Australia and our special guests Philip, Stephanie and Eimear from the United Kingdom and Ireland.

Excited members from all these countries met up and we held a special Powhiri (Maori Welcome) in the beautiful grounds of Tatum Park, North of Wellington.

On Friday, we started with a morning meeting, and a word of the day in Te Reo Maori i.e. Morena (Morning). Philip led the meditation then the talking stick was passed around the 70 registered guests including pronouncing the word of the day and another word to describe how you were feeling.

That night, we had singing around the fire and again I went to bed at midnight and rose at 6.30am. I find I just get too excited at gatherings and want to make the most of it. The Wyld Moon (Full Moon) didn’t help with her radiant energy (Marama is moon in Te Reo Maori) - with this particular moon we were asked to “keep calm and patient” very apt with so much going on! On Friday, I helped with the Bardic Initiations which was very moving when I knew the people being initiated.

On Saturday,  there were workshops and Philip and Eimear also gave a forum on what it means to be a member of OBOD. It was very interesting and the talk was recorded. After this,  we drove out to visit the Labyrinth at the Grove of the Summer stars.

Sunday - Ovate Initiation day and I also helped with this and it was held in the same sacred place as the Bardic Initiation - again it is very moving to be involved in these initiations and to see the new Initiates looking so radiant and happy afterwards.

Later I  gave my talk and guided meditation on how to improve communication with spirit through “Farewell to a loved one”. I opened with a Waiata (song) “Wairua O te Puna Aroha” and ending with a “Fare thee well” song. I received good feedback from this workshop -

Later, we enjoyed another lovely evening of songs, stories and staying up late!

Monday  - Initiation into the Druid Grade overseen by our special guests, Stephanie was also there but she had to leave before the photo was taken. Philip, Stephanie and Eimear made the effort to attend all the initiations whether in one group or another and it was greatly appreciated by all the initiates. 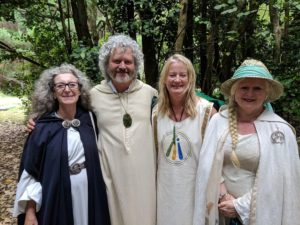 Monday - Lughnasadh - the festival for family and community and what a joy to be celebrating the event with our newly formed “tribe”. Many of us were processing the energy over the last few days with seeking out quiet space to write up our notes. For myself I sat against the Oak tree to assimilate new insights gained, balance and release energy and ground myself. I enjoyed Linda Marson’s talk on the Tarot. I also loved Sandra’s talk on the process of creating the Druid Oracle cards. The Lughnasadh ceremony was magical. Our Grove members were asked to plant sunflowers in pots so they could be arranged in a circle around the lawn. Tom made the Sun wheel with sparklers and when Kacey walked around dressed up, holding the sunwheel alight with spinning sparklers, he looked magical.

Monday night was also a late one - after Eisteddfod where others contributed their lovely songs, stories and poems a group of us stayed on and sang, told stories and poems and drank various liquids. We sung to the moon and it was magical. None of us wanted to leave as we were heading home tomorrow. At 3 am it was cup of tea and biscuits time before we went to bed.

Tuesday - Last day of the Assembly.

The morning word of the day was Ka Kite Ano ( See you later) we were all a little emotional to say the least (A few including myself a little wobbly from the late night) however, we cleared our rooms after the morning meeting and got ready for the closing ceremony. The birds sang throughout the whole ceremony. Farewells and hugs were exchanged afterwards as the visitors left.

Now, I am holding on to all the precious memories. It was a joyous gathering with like minded OBOD’s.  Have a wonderful 2019 and see you at the next gathering.

Hosted By - The Grove of the Summer Stars

The Order of Bards, Ovates & Druids

The 16th Southern Hemisphere OBOD Assembly was a wonderful event held over 5 days at the Baden-Powell Scout Center in Pennant Hills NSW. The venue is situated on 36ha of bushland with an amazing stone amphitheater, open air stone chapel, stone pathways, huge trees, open fireplaces, and lots of wildlife. It was hosted by the Song of the Eastern Sea Seed Group from the Central Coast of NSW and had over 50 OBOD members attend.

The weekend began on the Friday afternoon where we all met in a hall where we watched a welcoming video that Philip Carr-Gomm was kind enough to record for us. This was followed by a video, including a song, that Damh the Bard recorded for us. What an inspiring way to start off the weekend. And we can’t thank Philip and Damh enough for taking the time to record the videos.

This was followed that evening by the Welcoming Ceremony where 4 of the host group dressed as four of the faces of Brigid. Choreographed by a drum beat and with very few words spoken, everyone who attended where given gifts relating to Fire, Poetry, Smith Craft and Healing.

The evening was topped off with music, stories and poetry around a fire.

Saturday morning began with a Chakradance movement meditation led by Christina and then after breakfast was the Opening Ceremony where an urn of soil gathered from the previous Assemblies was placed on the Altar, and a staff with a flame on top was lit and was left to burn until the Closing Ceremony on the Tuesday.

The Opening Ceremony was followed by a talk on the founder of OBOD, Ross Nichols, his friendship with Gerald Gardner and the Ancient Druid Order given by Chris. This was followed by a Creative Writing workshop held by Danuta.

In the afternoon we had Bardic Initiations which had to be split into 2 ceremonies as there were 12 new Initiates. The afternoon ended with a mask making craft session and then after dinner we all headed down to the amazing stone amphitheater for a masquerade Eisteddfod around a bonfire. The eisteddfod began with an amazing shadow puppet show put on by Valkyrie, the Eisteddfod facilitator, and some of the Macadamia Grove members. This was hilarious and got everyone into the mood for all of the wonderful performances that followed.

Sunday morning began with another Chakradance movement meditation and after breakfast we broke off into Men's and Women's Circles held by Rollick and Jenneth. This was followed by a short talk by Elkie where we were all invited to fill in a questionnaire to help with a project on the History of Druidry in Australia.

After this there was a Workshop on Ayurveda led by Danuta, followed by a Workshop "Farewell to a loved one" held by Charlene. In the afternoon the Ovates and Druids performed an Ovate Initiation while Jenneth held a Bardic Workshop where we created a soundscape as we worked through part of the story of Taliesin. This was followed by a Lecture on creating a Local Wheel of the Year given by Julie.

The Sunday evening began with a discussion on the future of OBOD Assemblies and ended with people playing music and telling stories and poetry around a fire.

One of the highlights of the weekend involved meeting at 5:20am Monday morning for a beautiful Imbolc Ceremony where we walked through a spiral of hundreds of candles, past Druids from the Past, and into a central circle where we gathered around a bubbling cauldron surrounded by flowering snowdrops. During the Ceremony flaming swords were used to light a flaming gateway to welcome Brigid into the circle. It was an amazing ceremony.

This was followed by a Lecture on the Origins, Attitudes, Observations, of the Art of the Bardic Storyteller by Michael. Following this was part 2 of Danuta's Creative Writing Workshop, and then a Workshop on Australian Druidry and Ritual Practices held by Julie.

In the afternoon the Druids held an Initiation while Bards and Ovates joined another Workshop on the Muse held by Jenneth. This was followed by an afternoon of Market Stalls where the talents of our members were put on display for all to purchase. At the same time it was a time of Divination where Pamela held a Workshop on the Wheel of Segais and others gave Tarot readings or offered Aromatherapy or Reflexology sessions.

Tuesday began with another wonderful Chakradance session, followed by the Closing Ceremony where the Urn of soil had local soil added to it, and it, the talking stick, Awen signs, and sacred candle were handed over to the Golden Wattle Seed Group who are hosting the 2018 Assembly in South Australia.

The hosts would like to thank all who came and made the Assembly a wonderful gathering.

Hosted By - The Song of the Eastern Sea Seed Group 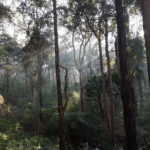 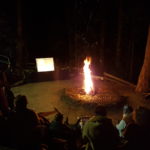 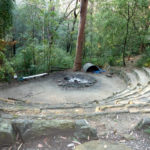 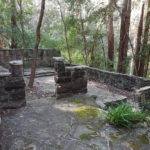 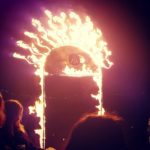 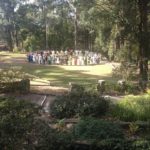 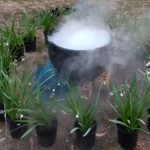 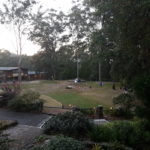 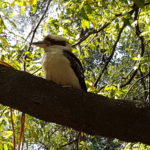 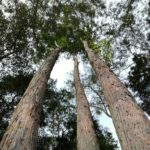 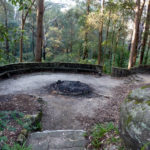 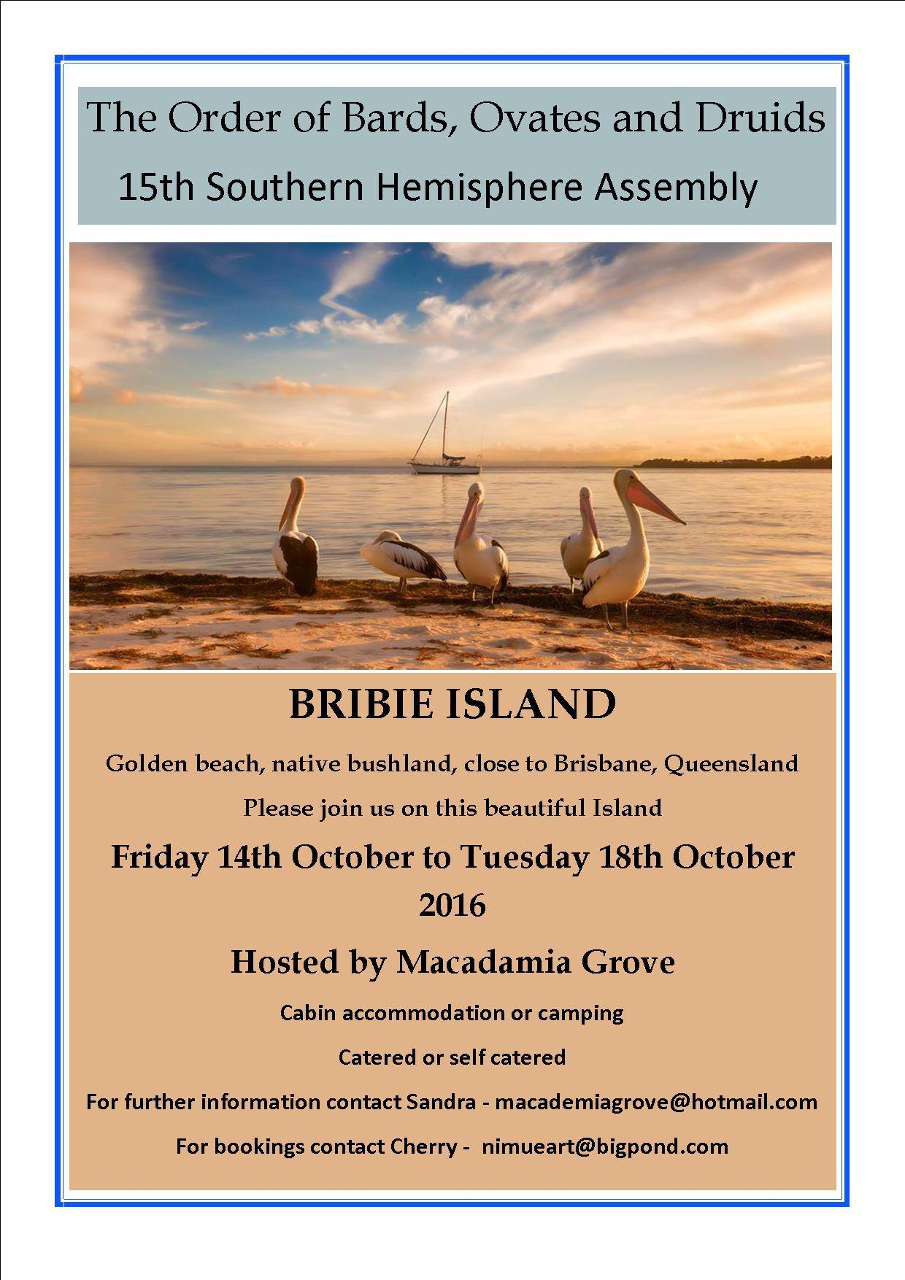